THE HISTORY OF THE GALLERY

The Galleria dell’Eremo has been hosting for years art exhibitions in the main and second floor of the Town Hall, once part of the Camaldolese Hermitage. The exhibition space, full of history, are well suited to welcome art exhibitions, given the regular conformation, the brightness and the charming historical and the charming environmental setting of the structure.

The elegant sixteenth-century palace was built on the gentle hill named Colle Capriolo (Roe Hill), as a place of rest and vacation for the aristocratic family Del Giudice from Conegliano, at the time of the Serenissima Republic of Venezia.

The original complex consisted of the mansion, sourrounded by 50 (trevigiano) fields and by a small church.

Received the donation with all the regular civil and ecclesiastical permissions, the Anchorites monks took charge of the property on the 24th of October 1665. They built 14 cells, each consisting of a place to sleep, study and pray, with its own service and woodshed. Outward there was a small garden enclosed by a brick wall and, sourrounding the entire complex, the walls of the cloister.

The complex on the Colle Capriolo took the name of Rua because the first Camaldolese monks came from the Hermitage of Mount Rua on the Euganean Hills.

From the first day of the Hermitage’s opening, the large main room of the building – the current first floor of the Galleria dell’Eremo, was set up as a temporary chapel. Only later, on the 15th of October 1718, the new church dedicated to Saint Mary of the Assumption and Saint Romuald, could be consacrated by Cèneda’s Bishop, Francesco Trevisan.

The Galleria dell’Eremo is therefore named after the ancient Camaldolese Hermitage.

Inside the Hermitage the monks lived following Saint Benedict’s strict rule “ora et labora” (which in Latin means “pray and work”). The original arrangement of Colle Capriolo’s Hermitage is clearly visible in a Eighteenth century print and in an oil painting of the same period, which is still preserved in Rua’s Parochial Church.

The Hermitage became the destination of pilgrims and intellectuals who appreciated its suggestive hilly location and the extensive library.

The first Father Superior was Anselmo De Conti Martinengo coming from the Saint Clement Hermitage on the island of Venice.

The Hermitage ceased its activity as a result of the Napoleonic decree of the 28th of July 1806, year in which the buildingwas auctioned off with all its complex and land.

In 1876 part of the Hermitage was acquired by the local administration, that turned the historic building in the Town Hall.

Today are preserved only the Town Hall and four cells, in addition to the parish church that was remodelled several times also due to some earthquakes.

The Galleria dell’Eremo was officially inaugurated onthe 4th of May 2019, thanks to the contribution of I.R.C.A. S.p.A., IndustriaResistenzeCorazzate e Affini, represented by the President Gianfranco Zoppaswho, by acceding to the medium Art Bonus, has allowed to create a lighting system appropriate to the intended expository use of the City Hall. 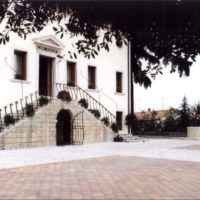